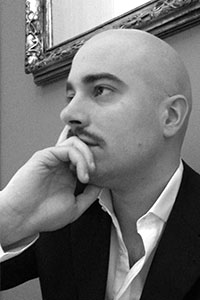 Marco Borroni began his musical studies in piano at an early age.

While graduating from the Conservatory of Milan with the highest marks, he studied composition for 5 years with M° Fabio Vacchi and chorrepetition with M° Umberto Finazzi. He has studied at Accademia del Teatro alla Scala.
Currently he his studying conducting with M° Dante Mazzola and with M° Edoardo Muller.

He played and he was assistant conductor in various productions of: “Piccolo Spazzacamino” by Benjamin Britten, “Il Signor Bruschino” by Gioacchino Rossini and “La Traviata” by Giuseppe Verdi (Conservatory of Milano) ; "Don Pasquale" by Donizetti and “L'Italiana in Algeri” by Rossini (Teatro alla Scala, Milano) and, by the same composer “L'Occasione fa il ladro” and "barbiere di Siviglia" (tournée of the Accademia della Scala) and “La Scala di Seta” (Ticino Musica, Lugano) and "il finto Stanislao" by G.Verdi (teatro filarmonico of Verona).

He is frequently appearing in concerts as an accompanist, in december 2010 he has been invited to South Korea (Seoul) by the Instituto di Cultura Italiano in Seoul for a concert featuring Italian and Korean singers and in March 2012 had a concert in Kotrynos baznycia in Lithuania (Vilnius)
On december 2012 he worked as rehaersals pianist and coach in a "Viva Verdi" show in Zurich (Swiss)
On july 2013 he worked as assistant conductor and vocal coach for the production of "L'Elisir d'amore" in Klaipedas theatre.
He is pianist and koncertmeisteris at Vilnius national theatre.
He is currently playing in the vocal studios of Luciana Serra